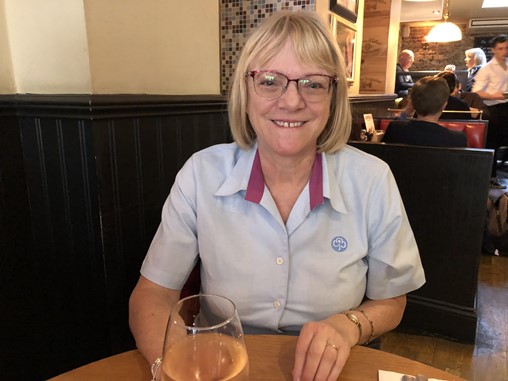 Many people will remember Christine Harm FBDO (Hons) CL as a professional, straight-talking dispensing optician. Christine was this and so much more. At seven years of age, Christine joined the Girlguiding movement and started wearing spectacles; each visit to the practice enhanced her interest in all things optical. Working as a ‘Saturday girl’ in practice made her decide to follow an optical career, therefore in 1974 she attended Bradford College as a full-time student. Christine’s pre-reg position was at TH Collison Opticians in Slough, which proved to be a major influence in her career. Under the guidance of Brian Collison, she learnt her firm foundation knowledge of contact lens fitting through working in the London eye hospitals, her spectacle dispensing and low vision dispensing skills, and her business acumen. At 21, Christine became a Freeman of the City of London through the Worshipful Company of Spectacle Makers, and later a Liveryman. She was extremely proud of both honours. Christine moved to the Stockport area in 1984 when she was employed at George Davis Opticians, and was subsequently promoted to contact lens manager for the D&A Opticians nationwide group. Her responsibilities lay with training contact lens opticians (CLOs). Later, she was part of the team responsible for opening the first Vision Express stores in the UK. Training and enhancing fellow colleagues’ skills was a passion of Christine’s. She became an ABDO council member, distance learning course tutor and dispensing practical examiner in 1985, which led her to teaching and examining overseas. Christine was always firm, fair and friendly – and was able to see potential in everyone. It was a natural progression for Christine and her husband to purchase an optical business in Ellesmere Port, Cheshire. The business recently celebrated its 21st anniversary. Throughout this time, Christine continued to work as a visiting CLO at the Countess of Chester Hospital, where she enhanced so many patients’ sight. Christine’s passion for training and education was fulfilled by becoming a General Optical Council education panel visitor. Christine will not only be missed by her fellow colleagues and her patients, but also by her Girlguiding family. She was actively involved with the Guides, achieving the position of county commissioner, organising camps, weekly meetings and, once again, enhancing the lives of so many young people she met.